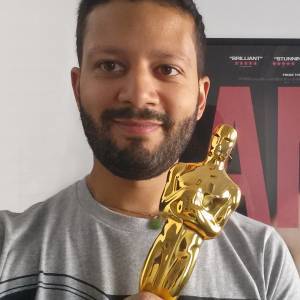 Since graduating in 2014, Rafael has already had a glittering career. In 2016 his team picked up an Oscar for their work on the moving documentary Amy, about the life and death of singer Amy Winehouse. He has also worked as Technical Editor on several films and documentaries about high-profile sports stars.

Ravensbourne initially appealed to Rafael because of its use of high-end technology and the access to tutors that have a wealth of experience of working in the industry.

Ravensbourne helped Rafael to build his connections with other people in his field. A particular highlight for him was the Industry Day Event where he had the opportunity to meet with professionals and learn valuable insights into professional life.

Looking back, Rafael feels that the Editing and Post Production course was the stepping stone he needed to launch his successful career. He now as an Assistant Editor at On the Corner Films, where he works across multiple projects including the second series of a Netflix series.

Previously he has worked as Technical Editor on the feature film Maradona about legendary football player Diego Maradona, on Make Us Dream, a documentary about Steven Gerrard and the film Ronaldo about football player Christiano Ronaldo.

Rafael’s advice to prospective students is to be to get yourself seen and meet with as many industry figures as possible. Commenting on this he said: “Once you leave university you will need to contact these people to find a job, and this will place you many steps ahead of any unknown face”.

Study the same course as Rafael