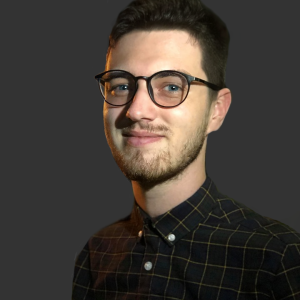 Since graduation, Charlie has floor managed for Channel 4 News and ITV News. He had the chance to manage the ITV News’ Election programme in 2019. After impressing employers during his internship, he is now associate producer at popular shopping channel, QVC.

Charlie was attracted to Ravensbourne because it offered a specialist television production course. The surrounding area and great connections to the city as well as the atmosphere on campus were big positive factors too.

For Charlie, a major benefit of studying at Ravensbourne were the strong connections to industry and the emphasis on practical skills. Commenting on this he said, ‘Often, it felt less of a university course and more of a production house or studio- and that’s the way it should be on a TV course’.

The variety of the modules and guest lectures helped give him a broad understanding of the discipline and prepared him for securing work after graduation. He gained valuable studio experience when he worked with the Royal Shakespeare company on a live brief.

One of his favourite moments at Ravensbourne was shooting his final major project, which was a pilot episode of a quiz show. This has since been pitched to a couple of networks. Recalling this time, Charlie said, ‘From the initial concept it was all guns blazing- three months of non-stop run throughs, tweaks, rehearsals, set designing, question writing, contestant castings, graphic designing and so much more’.

He was also involved in creating a three-part parody of The Great British Bake Off. Charlie and his team built a replica set of the show and after the success of the project they sent the series off to some of the real Bake-Off contestants, who loved it.

Charlie’s advice to other students is to throw yourself in to any production and treat every project like it is real life. He concludes, ‘You won’t get spoon-fed at Ravensbourne, it’s about you making the most of it- and that’s why it’s got the industry reputation it has.’

Study the same course as Charlie