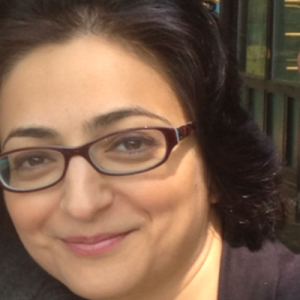 Shoku Amirani a bilingual Radio producer at the BBC with almost two decades of broadcasting experience.

Over the years, she has produced flagship Radio 4 programmes such as Woman’s Hour and Last Word, as well as originating critically acclaimed Documentaries for Radio 4 and the World Service which have been nominated for Awards.

Alongside her programme-making career, she is a passionate advocate and champion for diversity, inclusion and positive lasting change. She is working to remove barriers to progression so that everyone can thrive, irrespective of gender, race or background.

She regards Employee Resource Groups as agents of change and has run two BBC staff networks.

Shoku recently stepped down as the Chair of BBC Embrace, the award winning staff network for Black, Asian and Ethnic minority staff which she led since 2018. She has been at the forefront of spearheading change and helped to shape industry leading recommendations as part of the BBC’s Diversity & Inclusion strategy.

Shoku sits as an Advisor on the BBC Editorial Standards Senior Leadership Team. She has produced thought leadership seminars for the European Broadcasting Union and One World Media addressing the media coverage of refugees and minorities.

She has also served on the judging panel for the 2019 UK Diversity Legal Awards.

Originally from Iran, Shoku is a fluent Farsi speaker and holds a BA Honours degree in Philosophy from King’s College London. In her spare time she enjoys cooking or watching cookery programmes!

Board of Governors
Ravensbourne University London