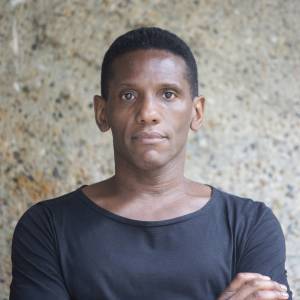 Othello De'Souza-Hartley is a London-based Visual Artist working in mixed media. Inspired by the mood and psychological themes of classical painting. His unique approach to composition, light and gaze combines to unveil the inner workings of his subjects.

He has received commissions from a range of institutions including, Museum of Liverpool, National Portrait Gallery, and The Photographers’ Gallery.

He has had solo shows at Campo XXV Aprile (Rome Art Week), Outside the Zone Gallery, Sulger-Buel Gallery, Camden Arts Centre and The Underground Gallery, and featured in group shows at the Gasworks Gallery and the APT gallery London.

De'Souza-Hartley's aesthetic is enriched by paradox, injecting dynamism into static imagery and inviting the viewer to question the condition of his characters. Past photographic projects have sought to unmask the construction of masculinity in the 21st century, the ethereal haze of dreams and the inimitable nature of sartorial self-expression. Recent films bridge the relationship between photography and the moving image while maintaining the flow of the avant-garde.

De’Souza-Hartley has run photography workshops for National Portrait Gallery, the Photographers’ Gallery, Tate and the V&A amongst other galleries. He is currently a visiting lecturer at Ravensbourne on the foundation course ‘Lens Based Media’. Othello also works at Central St Martins as a visiting lecturer and works for the widening participation department at the University of Arts.