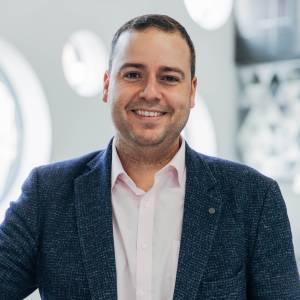 Alberto is an architect and senior academic at Ravensbourne, where he leads the Department of Architecture.

His academic and professional projects cover various scales and project approaches in architecture, design and engineering, including projects in places such as Spain, South Korea, China, Slovenia, Italy, France, the United Arab Emirates, the United States or even the planet Mars. This latest is where he developed his first environmental research, Mars UTOPIA, which investigated the possibilities of 3D printing and new materials in the colonisations of the planet Mars as a solution to generate architectures in extreme environments due to climate change. Outstanding project by the Royal Academy of Arts and published by Dezeen, Designboom or Archdaily, among other recognised publications. As a result of this, in September 2017, he was appointed as Spanish Ambassador for Science to the United Kingdom, a program that combines diplomacy, science and technology.

After exploring different academic and industry opportunities across Europe, Alberto started his professional practice in Madrid a decade ago, where he established IDEA architecture office. An interdisciplinary studio collaborating with architecture offices and the public sector, offering consultancy services in technical and innovative concepts around digital crafting, sustainability and social impact.

Since then, Alberto has been immersed in new academic challenges around teaching, learning and leadership in Higher Education. Successfully achieving unprecedented positive results on student experience.

Alberto is a registered architect (ARB) and also a fellow in institutions such as HEA (Higher Education Academy) or RSA (Royal Society of Arts), honours that have allowed him to collaborate with some of the most recognised professionals in design, creativity and technology industries.

The latest, Mars UTOPIA, researched the possibilities of 3D printers and new materials in the colonisation of planet Mars, as a solution to generate architectures in extreme environments. The project has been noted by The Royal Academy of Arts and featured by Dezeen, Designboom or Archdaily, among other renowned publications and has been recently exhibited in Madrid by the Telefónica Foundation.

In addition, he has completed a Postgraduate Certificate in Teaching and Learning for Creative Courses in 2018 at Ravensbourne University London.