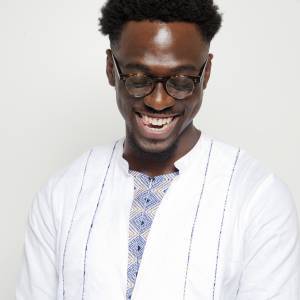 Since graduating from Ravensbourne, Axel has carved out a glittering career. He worked for radio station LBC Radio, BBC and Radio 4, before being head-hunted for The Guardian podcast series.

Axel wanted to go to university to learn new skills and improve his chance of getting a creative job. When he found out Ravensbourne was launching a new course based around what he already did for fun, writing music for film, it was a no brainer.

It was Ravensbourne’s strong industry links that attracted him the most, along with its practical focus.

One highlight from Axel’s time at Ravensbourne was the opportunity to work as a playback operator at the 2021 Olympics. A chance tweet from LBC presenter James O’Brien was the catalyst he needed to launch his career.

A Twitter exchange between the pair and Clive Jones, the head technical operator on LBC led to Axel securing a weekend job at the radio station while he was still at Ravensbourne. He then went on to work on the Drivetime show once he had graduated. After working for the radio station for four years, Axel worked his way up to become the lead studio manager.

Axel left LBC after securing a position at the BBC working on Radio 4 and the World Service, before The Guardian headhunted him to work on its podcast series Today in Focus.

He was told it was the creative work that supplemented his work at LBC which grabbed The Guardian's attention, alongside his solid experience of working in a newsroom and a studio.

A typical day at The Guardian

In his current role at The Guardian, Axel works alongside both audio producers and journalists. He takes a rough edit of the next day’s podcast and cleans the interview mix with effects to enhance the story.

Remarking on this he said: “A musical ear doesn’t just apply to making music. It’s a major help when it comes to pacing speech or knowing when to stop and start the music again in time after a dramatic pause. Everything has a rhythm, and that comes in handy when podcasting.

Over the years Axel has created several sound and film productions for his own poetry and music passion projects. He has also produced a podcast with the art charity, Poet in the City.

Having stepped in to the world of podcasting, Axel is keen to produce more of his own with a creative element. Commenting on this he said: There’s so much you can do and say and I feel like it’s the perfect medium that fuses my music, sound and storytelling skills. I’d also like to give back and support young people to develop their skills in the sound and music world.”

Axel's advice to other students is to: “Ask questions–don’t suffer in silence. If you don’t understand what the difference between a condenser and a dynamic microphone is, ask!

"Don’t compare yourself to others, everyone has different skills and talents so learn from each other rather than compete. There’s plenty of room at the table and don’t let anyone tell you otherwise. And have fun! You are going to make people feel things with your work and that is guaranteed to be a rewarding experience, so remember to enjoy the process.”

Study the same course as Axel