Ester Wikström was always destined for great things. Since she was just 12-years-old, she knew she wanted to make her mark in the creative world. A partnership with her design university in Sweden and Ravensbourne offered Ester the chance to study in London on the BA (Hons) Advertising and Brand Design course. It gave her access to the unparalleled creative opportunities within the city.

Before she'd even graduated, Ester and a friend had already scooped a prestigious D&AD Yellow Pencil Award. The course's strong industry connections and Ester's natural talent and drive meant that she had already been offered positions at two leading agencies before she'd even graduated. She now works at renowned design agency JKR, working with some of the biggest brands on the planet. We caught up with her to find out more about her time at Ravensbourne and how it helped propel her to where she is today.

You were doing some tutoring in the building the other day weren’t you?

I was, it was great fun, if a little bit strange being on the other end of the table as a teacher rather than the student. It doesn't feel like long ago that I was in their position, so having students listen to me as a professional is quite surreal.

I was there to give some advice to the current third year students in preparing entries for D&AD New Blood Part, which was part of the course's ‘How I won my Pencil’ workshop series.

Could you tell us a little bit about what you've been doing since you've graduated? Where have you been working and what does your typical day look like?

So straight after finishing the degree show in June 2021 I was thrown in the deep end and had a couple of different agencies reach out to me and wanted to hire me. I was extremely lucky in that sense.

I am now working at the creative design agency JKR in London. Getting this role was a dream come true for me, as my main goal was to work amongst the best agencies in the world. That's what I get to do every day – sometimes I have to pinch myself that this is my everyday life.

So I’m either working from home or heading into the office and working with some of the biggest brands in the world. We work with them to develop creative brand identities and have lots of fun in the process. I can’t say specifically what brands I am working on, but I can say that we’ve just released a rebrand of M&Ms. It was amazing to see the craft of my team members now out in the real world.

What initially appealed to you about Ravensbourne and your chosen degree?

So I had quite a weird way into industry I think. I’ve always known since I was like 12-years-old that I wanted to work in the creative industries, but I didn’t know specifically which area I wanted to go into; whether I wanted to become a copywriter or a brand designer or a graphic designer.

I ended up representing Sweden and The Swedish National Skills team in EuroSkills and WorldSkills, where I got to compete against some of the world's best designers. After getting the chance to compete and to represent my country as a graphic designer, I knew where my strengths and talents were.

I have always wanted to be surrounded by the best people in the world and I realised that if I wanted to make that come true, then I needed to continue down this path. I initially went to a communications university in Sweden called Berghs. At the time they had a programme called the Berghs' bachelor. As part of this programme you start off studying there, and then go abroad to complete your degree programme. At the time I was pretty sure that I wanted to go to Sydney, but then on the last day of the allocation process, London was also thrown into the mix because someone mentioned Ravensbourne to me.

When I looked into Ravensbourne, I realised that it offered so much more than just putting a degree in your hands. Straight away, you were working with industry, and this suited me, and my way of working perfectly. I’m definitely a learning-by-doing type of person. And the fact that the university was in such a central location in London too – you’re literally in such a central hub for design in Europe and the rest of the world really.

I was also drawn to Ravensbourne because the course itself was so broad. It gave you the creative freedom to really explore different avenues and understand where you wanted to focus your attention. I just knew from the get-go that it would be the place to teach me all the tools that I needed.

What do you think you gained at Ravensbourne that you couldn't have gotten studying somewhere else?

I would say multiple things, but the opportunity to network is a big one. Some of my friends that studied elsewhere in comparison, okay so they had a nice portfolio, but they didn’t know the industry players in the same way that people on my course did. We were being mentored by people in the industry, and I secured my first internship thanks to that networking power. The course really is a fast track to industry, because when you graduate, you already have those all-important contacts.

A selection of Ester's work

What were your highlights from your time at Ravensbourne? - Both personally and professionally

It is really is hard to pick, but I’d say professionally the whole of third year. Me and my creative partner and fellow advertising student, Mica Helger won the D&AD Yellow Pencil for our project called 'For the Procrastinators' which was a brief from Fossil & MSL.

This award is really highly regarded in the industry and showcases young talent in the design and advertising space. It is only given out for really exceptional work, so to receive this accolade was truly incredible.

Personally, I would say the fact that I got to spend my entire university experience with people just as passionate as me. It was a massive learning experience too, not just from people on my course, but across the whole institution.

A couple of my closest friends were film students, and they taught me something new every single day. It’s a really inspiring environment to be in, plus you never know when those connections and little bits of insights that you’ve gathered might serve you later down the line in your career.

How did Ravensbourne help you to achieve your professional goals?

I was quite a cocky 12-year old I think, and my goal was always to be amongst the very best in my profession. But there was this preconception that designers were these white men in black turtlenecks and that it was a tough industry to crack. Ravensbourne helped me to realise that it was possible to break that glass ceiling and make my mark, in a previously male dominated industry.

Ravensbourne gave me the tools and the connections to flourish. I met the right people to be able to pursue my dreams.

I would say student life at Ravensbourne wasn’t exactly atypical, especially when compared to the life my friends were living in Sweden. In Sweden it’s probably all a bit more relaxed.

One of the main benefits of student life at Ravensbourne and in London is that you meet people from so many different walks of life. It’s London, it’s gritty and it can be in-your-face at times. But everyone is very unique and being true to themselves. It was an incredible life experience to be able to study in this city.

Were you working while you were studying?

I was doing some freelance work up until the end of my second year alongside my studies, but then I realised the pressure was getting a bit much. For that reason in my third year I decided to concentrate purely on my studies.

What were your favourite classes?

I think I would have to say the project we worked on at the end of second year. We had two real life clients come in to work with us. It was an amazing feeling and so rewarding to work on a project right from inception to the finished article, so early on in my career too.

Do you have any advice to prospective students?

Remember to enjoy the experience, because it goes so much faster than you think. But also, just always make the effort to be interested in everyone you meet. You never know when those connections will come in handy, and the broader your perspectives are in terms of your creative parameters, the more likely you’ll be able to produce some really career-defining work. 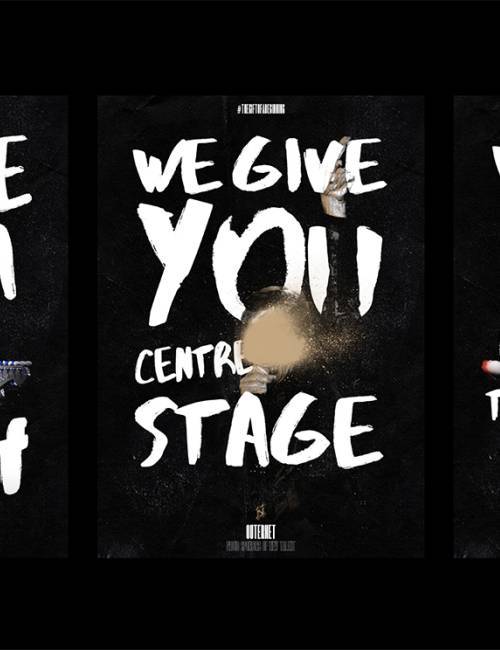