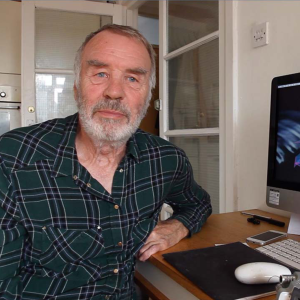 During the 1980s, the BBC launched the computer literacy project. The broadcaster had correctly predicted the coming microcomputer revolution that would affect all areas of life. Acorn were chosen to produce a machine to the BBC’s specifications and the hugely influential BBC Microcomputer, affectionately known as The Beeb, was born. To coincide with this, ‘The Computer Programme’ was launched, a series that explored the new technology. This in turn spawned a number of programmes of which ‘Computers in Control’ was one. The titles featured one of the new computer-controlled robot welders that were coming on-stream in the car industry. A demonstration model was tracked down in Colchester and the concept was explained to the programmer. This was that the robot would trace out the word ‘Control’ in space, and a visible word would be added in post-production. The method we devised was to write the word ‘Control’ on a large board so that the movement of the robot arm could be programmed point by point as it traced the outline of the lettering. The board would then be removed and the arm filmed back-lit to give a sense of drama. The ‘neon’ lettering would be filmed as back-lit artwork as a reveal on a rostrum camera and the two pieces of film combined in post-production to give the impression that the robot was writing the word ‘Control’ in space. Unfortunately, things didn’t quite go according to plan, as the robot arm had also been pre-programmed, for reasons of speed and economy, to move from one point to the next nearest point. So, while tracing one letter, the arm would jump to the nearest point on the next letter and then back to the previous one, producing a strange zig-zag line. Programming each letter separately, judicious close-ups and editing rescued the sequence. The music was specially composed to picture by Roger Limb at the BBC Radiophonic Workshop.