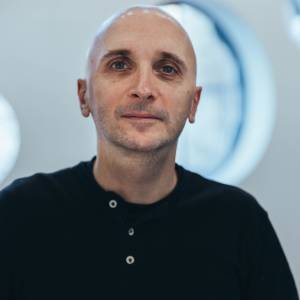 Chris made his first steps in music and technology at an early age and has been revolving around these topics ever since.

He holds postgraduate degrees in sound design (PhD), postproduction (MA) and music technology (MSc), as well as undergraduate degrees in music performance, software development and multimedia. His research interests include music and audio production, audiovisual media, audiovisual perception, 3D and immersive audio, virtual and augmented reality systems and development, and the impact of digital technologies on media and education.

Chris’ academic career began in 1992, when he started teaching music performance and theory to undergraduate level students. Between 2000 and 2006, he taught IT and software development in various further and higher education institutions in Greece. Between 2010 and 2015, he worked as an assistant lecturer and laboratory leader in Sound Design and Music Technology at the University of York (UK).

From 2017 to 2019, he worked as a lecturer in Audio at SAE Institute, and between 2018 and 2019 as a subject leader and senior lecturer in Audio Production at Rose Bruford College in London. From December 2019, Chris took on the role of Course Leader in Music and Sound Design at Ravensbourne University.