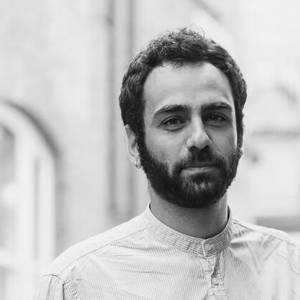 Nasios has worked for leading design offices Kengo Kuma Associates in Tokyo, Coop Himmelb(l)au in Vienna and for Prof. Will Alsop, who he worked with side-by-side as a designer and painter.

His passion for digital tools, fabrication and craft lead to a position at Based Upon and later at Heatherwick Studio where he furthered his interests on cutting-edge technology and fabrication.

Nasios has been actively involved in academia as a guest critic at the Bartlett, AA, and University of Greenwich. He was a Visiting Tutor for Media Studies and taught Summer School 2018 at the AA. He has also taught design studio at University for the Creative Arts. Currently he is involved as a first year design tutor at Ravensbourne.

Nasios believes that architecture, similar to fishing, should involve travel, long stories, preparation, anticipation and daydreaming. His practice philosophy is a non-crystallised, free-form process to find freedom through what we do; where technique meets poetry, expression balances precision and vision surpasses history.

With these ever-growing ideals, he founded his studio, Urban Radicals, as an open collective to fish for ideas and to cook radical tectonics.