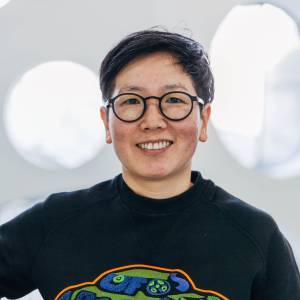 Mio Jin is a menswear designer and pattern cutter based in London. She graduated with a first class BA (Hons) Menswear Technology at London College of Fashion.

Following this, she completed a Masters in Menswear Technology with distinction at London College of Fashion and was awarded the prestigious Harold Tillman (former BFC chairman) Scholarship.

After gaining her Masters, she worked for Burberry, Martine Rose, Yuko Yoshitake, Khyeli and E.Tautz, and undertook a project called ‘Romanae Fabulae’ with artist Lucy Orta, sponsored by Zegna. She also exhibited at the Museo Nazionale Delle Arti Del XXI Secolo (MAXXI) in Rome, Italy. Mio’s work was featured in Italian Vogue, Wallpaper and exhibited internationally in places such as Australia and France.

She is currently appointed as Senior Lecturer at Ravensbourne and has been teaching at Kingston University since 2014 as a lecturer in fashion. She is closely involved in our MA, postgraduate Diploma and BA fashion courses, providing expertise in research and design development and creative pattern cutting.

Her responsibilities include leading the final year, placement tutor, personal tutor and module leader for both design research and 3D realisation. She also gets involved in students' industry projects at the likes of Burberry, Brooks Brothers, Banana Republic, GAP, Old Navy, Levi's, Topshop, Topman and Jigsaw.

Mio continues to collaborate on various projects with artists/designers, building up her research portfolio and experience as a practice based academic.