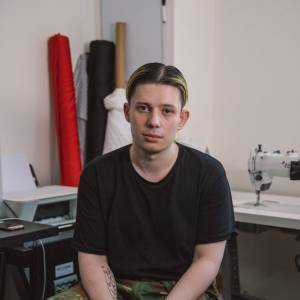 Eden had an unconventional upbringing and was homeschooled. He didn’t own a laptop or visited a major city until he started at university. Since making the big transition, he has become a celebrated designer and one-half of renowned fashion collective, ARTSCHOOL.

He is an active social justice campaigner and a firm believer that change in the fashion industry must happen from within. He has worked with the Houses of Parliament to pass the bill making non-binary recognised as a gender.

Eden always knew he wanted to pursue a career in the arts. His father was a prominent architect and passed away when Eden was just two, and Eden felt compelled to follow in his footsteps.

Despite having no recognised school qualifications, the tutors on the Fashion course took a chance on Eden and offered him a place.

At Ravensbourne Eden built strong connections with industry through several work placements. Within a month of starting at Ravensbourne he had already secured a placement with English fashion designer, Giles Deacon. He also interned with visual artist, Claire Barrow and with menswear designer, Grace Wales Bonner.

Eden worked with Grace for two years and became her studio manager in his final year at Ravensbourne. While he was working with her, she won the LVMH prize, which honours young designers.

Eden and his partner Tom Barratt launched their business ART SCHOOL with the support of non-profit organisation, Fashion East. He remarked that Fashion East has been, 'one of the most important initiatives in London in for the last 20 years’.

ART SCHOOL focuses on redefining gendered fashion and is a celebration of queer style. They defied convention when they showed as part of a men’s show with what was traditionally seen as a feminine line. The move created a large amount of backlash from the media at the time, but only made the pair more determined to succeed.

Study the same course as Eden